By entering your email address you agree to our Terms of Use and Privacy Policy and consent to receive emails from Time Out about news, events, offers and partner promotions.

Thanks for subscribing! Look out for your first newsletter in your inbox soon!

Film
Recommended
5 out of 5 stars 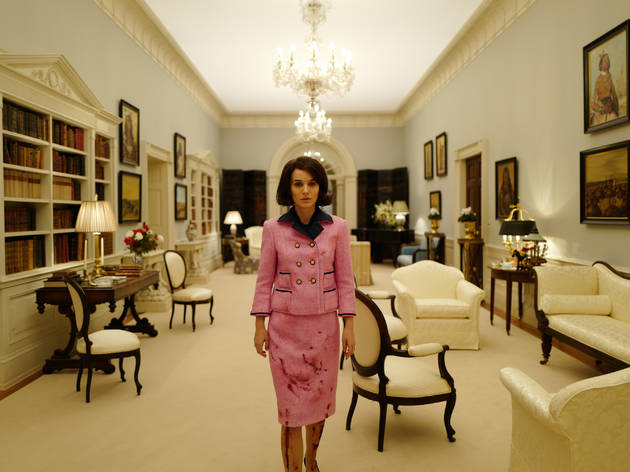 ‘Jackie’ starts with a face – more a mask than a face, puffy from crying and suffering a loss that few can imagine. It’s the face of Natalie Portman, playing 34-year-old Jacqueline Kennedy during the week after her husband’s 1963 assassination. Right from the beginning of Pablo Larraín’s near-experimental stunner, you can tell you’re in for a psychodrama of strange, hypnotic intimacy. And that's before you twig the orchestral smear heard on the soundtrack: a nauseating lurch of ‘Psycho’-esque strings provided by Mica Levi (‘Under the Skin’), who better than anyone captures the film’s theme of sudden, shocking change.

‘Jackie’ is a political period piece, something this Chilean filmmaker is especially good at (his ’80s-set Pinochet-era electoral comedy ‘No’ is better than a whole season of ‘Veep’). But more than any of Larraín’s movies, ‘Jackie’ is a deep dive into personal catastrophe. Bettering her work in ‘Black Swan’, Portman flutters like a sail in a brisk wind, supported by a director who often places his camera inches from her nose. Her Jackie is scattered, tense, wrecked and defiant in the face of those who would prefer she act in a certain way.

The smart script, by Noah Oppenheim, is built of disconnected moments. We see Jackie on the plane flying out of Dallas, shell-shocked as Lyndon B Johnson takes his emergency oath of office. We watch her later that night, shedding the iconic pink suit and washing the blood and brains from her hair. Some of these scenes are hard to endure. But the ones that stay with you communicate something unusual for a grief drama: forward-thinking savvy. There is JFK’s legacy to think about, as Jackie asks her aides about the scale of Abraham Lincoln’s funeral. She seethes her way through a touchy interview with a journalist (Billy Crudup, superb), insisting on total control of the piece: ‘And I don’t smoke,’ she says, puffing on a cigarette.

‘We’re just the beautiful people,’ spits Robert Kennedy (Peter Sarsgaard), furious at the thought of what his brother didn’t have time to achieve. Meanwhile, John Hurt plays a priest attempting to guide JFK’s widow through the worst of her black thoughts, although even he seems uncertain. ‘Jackie’ pummels you with grandeur, with its epic visions of the funeral and that terrible moment in the convertible in Dallas. Yet the film’s lasting impact is dazzlingly intellectual: just as JFK himself turned politics into image-making, his wife continued his work when no one else could.

By entering your email address you agree to our Terms of Use and Privacy Policy and consent to receive emails from Time Out about news, events, offers and partner promotions.

Thanks for subscribing! Look out for your first newsletter in your inbox soon!